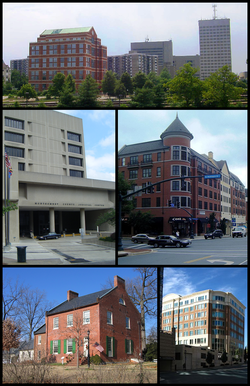 Rockville, along with neighboring Gaithersburg and Bethesda, is at the core of the Interstate 270 Technology Corridor which is home to numerous software and biotechnology companies as well as several federal government institutions. The city also has several upscale regional shopping centers and is one of the major retail hubs in Montgomery County

The Charles E. Smith Jewish Day School, the Melvin J. Berman Hebrew Academy and the Montrose Christian School, among other private schools, are located in Rockville.

Institutions of higher education in Rockville include Montgomery College (Rockville Campus), The University of Maryland University College (main campus is in Adelphi, Maryland), The Johns Hopkins University Montgomery County Campus (main campus is inBaltimore, Maryland), and the Universities at Shady Grove, a collaboration of nine Maryland public degree-granting institutions, all have Rockville addresses, but are outside the city limits.

Boundaries of Rockville as of 2004

The climate in this area is characterized by hot, humid summers and generally mild to cool winters. According to the Köppen Climate Classification system, Rockville has a humid subtropical climate, abbreviated “Cfa” on climate maps.[18] According to the United States Department of Agriculture, Rockville is in hardiness zone 7a,[19] meaning that the average annual minimum winter temperature is 0 to 5 °F (−18 to −15 °C).[20] The average first frost occurs on October 21, and the average final frost occurs on April 16.[21]